The values dictating our viticultural techniques are preserving the ecological balance. This means minimum intervention while supporting the living forces present in the vineyard.

Every weed and flower is welcome in the vineyard, it enhances the complexity of the soil’s organic structure.

Insects, arthropods, reptiles, mammals and birds- all are invited and support the fragile balance of predator and prey in the vineyard. 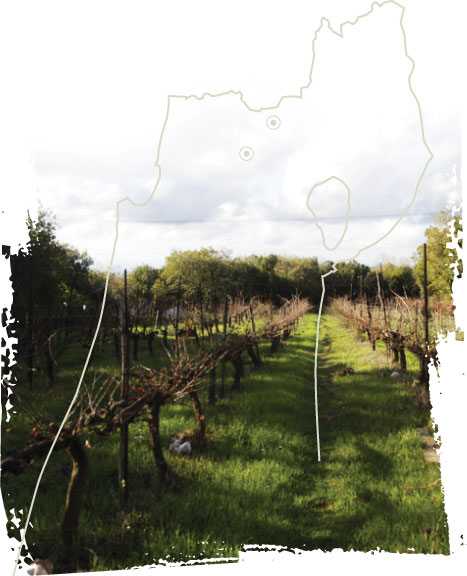 The vineyard is planted in Terra Rosa soil near Mitzpe Harashim, atop Mt. Shazor at an altitude of 860 meters. It is surrounded by established natural woods.

The vineyard faces west and sits within a natural wind channel. The average rainfall is 900 mm per year. The winter is cold and rainy with many frost. Snow covers the vines at least once a year.

The ascension of the Shazor mountain range, which separates the upper and lower Galilee, creates a cloud cover during the summer months. This reduces sun radiation and contributes to slow fruit ripening that is characterized by high acidity and refined flavors.

The first plot was planted in 1987 and includes mature Cabernet Sauvignon vines as well mature Chardonnay and Sauvignon Blanc vines planted together in the same rows.

The neighboring plot was planted in 2009.  The vines in this plot are planted in high density of 500 vines per dunam. The vines are low yielding (1-3 kilo per vine).

Tzivon Vineyard was planted in 2006. It is located at the foot of Mt. Meron at the source of Dishon stream, at an altitude of 735 meters, and is surrounded by natural woods.

The winter is cold with many frost, while the summer is characterized by dramatic day/night temperature differences. The cold nights allow the grapes to ripen slowly and preserve their varietal characteristics.

The winds are mostly northwesterly with an average rainfall of 650 mm per year.